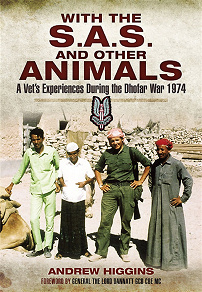 With the SAS and Other Animals

by Andrew Higgins
In 1970 at the height of the Cold War, the young Sandhurst-trained Sultan Qaboes of Oman, with secret British military backing, took on the communist rebels in a fierce but little known war. Along with regular British Army and ‘contract’ officers, the SAS played a key role in this bitterly fought but ultimately successful campaign.

The value of winning the ‘hearts and minds’ of the local population was quickly recognized and this is where a select band of Royal Army Veterinary Corps officers came in. The local economy was a primitive one based on agriculture and the author, freshly qualified and, by his own admission, somewhat naïve particularly in military matters, found himself solely responsible for the veterinary care of a territory the size of Hungary.

Attached to D Squadron, 22 SAS, Andrew Higgins learnt how to respond to the Jebali people’s love and concern for the animals which provided their livelihood – goats, camels, sheep, horses, cattle, even bears, hunting birds and pedigree hunting dogs.

His firsthand experiences and anecdotes of life dealing with every level of Omani society from rulers to black slaves and their varied livestock make for wonderfully atmospheric and often amusing reading. In short, With the SAS and Other Animals is an unusual and potent mix of Special Forces action and veterinary experiences. Readers may well conclude that it really shouldn’t have happened to a vet even in a desert war!