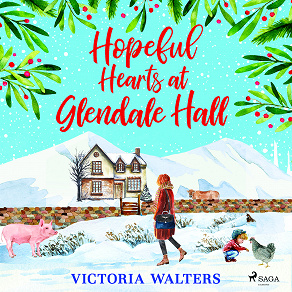 by Victoria Walters
What happens when love takes you to unexpected places?

Heather Douglas appears to have it all. But living on a farm in the Scottish Highlands with her partner, Rory Fraser, while bringing up their adorable toddler, Harry, isn’t easy. As a former librarian, Heather is worried that she’ll never fully fit into life on Fraser Farm. And after the death of her beloved mum eight years ago, Heather feels lost, as well as guilty for holding back accepting Rory’s marriage proposal because she can’t imagine her wedding without her mother.

So when ex-boyfriend, Stewart, appears in the village of Glendale, it’s a shock. The man who broke her heart years ago now has big plans for the neighbouring farm and wants Heather to be part of the development. Knowing that she’s living a very different life to the one they had planned at university leaves Heather wondering if she has made the right choices since she and Stewart broke up. Especially when things start to go very wrong on the farm...

This Christmas, Heather will need to face her fears and let go of the past or risk losing everything. She will need love, faith, and a whole lot of hope!
Return to the beautiful Highlands village of Glendale with the latest book in the bestselling Glendale series – the perfect cosy, uplifting, romantic read for fans of Heidi Swain, Milly Johnson and Holly Martin.


Victoria Walters writes up-lifting and inspiring stories. She's the author of the bestselling Glendale Hall series and two standalone novels - Summer at the Kindness Cafe, and The Second Love of My Life.

She has been chosen for WHSmith Fresh Talent and shortlisted for a Romantic Novelists Association award. Victoria was also picked as an Amazon Rising Star, and her books have won vast reader acclaim.

As well as being an author, Victoria works as a Waterstones bookseller. She lives in Surrey with her cat Harry (named after Harry Potter) and loves books, clothes, music, going out for tea and cake, and posting photos on Instagram.
Listen to sample
Log in to borrow